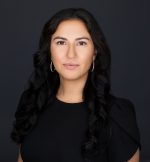 Daniela Carrion is a Partner and Shareholder at Linesch & Carrión. Dany is currently the Chair of the Employment Law Section for the Clearwater Bar and the President of the Pinellas Chapter of the Florida Association for Women Lawyers (PFAWL).

For the past two years (2021 and 2022), Dany has been named a Rising Star in Superlawyers, a distinction awarded to less than 2.5% of attorneys nationally, and in June 2022, she received the Leaders in the Law Award.

Born in Quito, Ecuador, Dany brings a diverse background, which has made her an avid Immigration lawyer and human rights advocate.

As part of her employment advocacy, Dany has handled various complex litigation cases in Federal and State Courts, including violations pursuant to the Fair Labor Standards Act, False Claims Act, Title VII of the Civil Rights Act, and the National Labor and Relations Act, amongst others. As a litigator, Dany has successfully obtained adverse findings against nationwide corporations. When it comes to immigration cases, Dany is known to take complex immigration cases, which often come to her after clients have lost hope.

Dany has also been involved with the CARA pro bono project by providing on-the-ground legal support at the Artesia, New Mexico, and Dilley, Texas Family Detention Centers, as well as locally through various organizations which provide pro-bono clinics and representation.